CS2D has more to offer than just the regular Counter-Strike gameplay! This page gives you an overview of available game modes.

Offers gameplay as you know it from the original Counter-Strike. Terrorists vs Counter-Terrorists. They fight in rounds with a time limit (about 3-5 minutes per round). When you die you have to wait for the next round to begin. A round ends when the time is over, all players of a team died or when all mission goals have been completed. The standard mission types (DE, CS, AS) only work in this game mode! 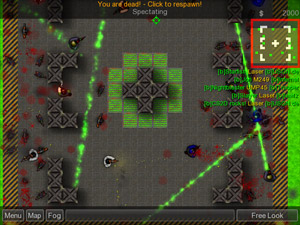 Simple fast paced action. You are on your own. No teams, no time limit, instant respawn after death. You can also activate an option to let players spawn at random places on the map and not only on designated spawn points. This option makes it possible to use nearly every map with the deathmatch mode.

Works like the Standard game mode but without round time limit and players can respawn instantly. There are great map types for this like capture the flag or domination. 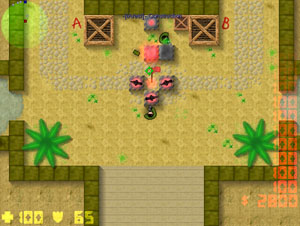 Two teams, no rounds, respawn and wrenches! Wrenches can be used to construct buildings like walls, teleporters, barbed wire, dispensers and even automatic turrets. This game mode works best on capture the flag (CTF) or domination (DOM) maps where turrets can be used to protect the flags or domination points. And there are also designated maps for construction (CON). It actually is fun on nearly every map though.

Brrraaaaaaaains! Everyone loves zombies - that's why CS2D has a game mode with them! There are two teams: Survivors (CTs) and zombies (Ts). Survivors have to do what their name implies: Survive. Simple, huh? No, because all zombies have to try to kill the survivors within a certain time limit. Every survivor who gets killed by a zombie respawns as a zombie. The survivor team wins when at least one person survives until the time is over. Zombies win when everyone turned into a zombie. This mode should be played on special ZM maps because survivors need weapon/ammo/health items which are lying on the map to stand a chance!

There are different missions and map types which can be chosen independently of the game mode. Some game modes need special map types to work well though. The mission/type of a map can be recognized by taking a look at the prefix of the map name (the part before the underscore). When you create your own new map with the map editor you should always choose the correct prefix for the map name so others know the type of your map without even loading it.

The following are standard missions and map types of CS2D. Many require special entities to make them work properly.

Counter-Terrorists spawn with one V.I.P. player each round who has to be escorted to a safe escape zone. Terrorists have to assassinate the V.I.P. or to prevent him from reaching the escape zone in order to win. The V.I.P. is unable to buy or collect weapons/equipment and starts with a pistol and a 200 armor point kevlar west.

Time to blow something up - at least that's what the terrorists are thinking. One terrorist starts with a bomb which has to be planted at a bomb spot (there are commonly 2 differnt spots to plant the bomb). Counter-Terrorists have to prevent that. They can either protect the spots and make sure that no bomb is planted at all or they can try to defuse planted bombs before they blow up.

There are multiple domination points (flag poles) on the map. A team has to dominate all of them in order to win. A point can be dominated by simply touching it while no player of the other team is close to it. There are also points which require 1 or 2 players of the own team to be close in order to dominate it.

Commonly used with "Zombies!" game mode only. T spawns will be for the zombies, CT spawns for the survivors. Good zombie maps provide some items for survivors and prevent that survivors can spawn kill zombies.

Maps designed to be played in "Deathmatch" game mode. Commonly with some items lying around.

Maps designed to be played in "Construction" game mode. Commonly with some items (especially money) lying around.

There are also some additional fun mission/map types (this is an incomplete list which only contains some very popular map types):